Gammon Construction, headquartered in Hong Kong, is a 50-50 joint venture between Balfour Beatty and Jardine Matheson, the Asian-based conglomerate.

The development, Lohas Park Package 9, will consist of three 54-56-storey towers on a five-level podium (see artist impression below).

Thomas Ho, Chief Executive of Gammon said: “This is the fourth project Gammon will be delivering for Wheelock and Company Limited in the Tseung Kwan O bay area.

“Gammon’s technical competence and its expertise in high quality developments have enabled us to secure this prestigious contract.”

Construction is set to begin in spring of this year and is pencilled for completion in 2021. Balfour Beatty says that 1,500 workers will be employed at peak periods, and that Gammon will make use of the latest technologies including BIM and 3D scanning.

The project is targeting achievement of ’HK BEAM Plus Standards’, a standard which requires a reduction in the environmental impact of the development and an improvement in environmental quality and end-user satisfaction.

Gammon Construction’s two parent companies have worked in partnership since 2004 and have completed numerous projects throughout China and Southeast Asia. The business is a major player in the Hong Kong and Singapore roads market in particular. 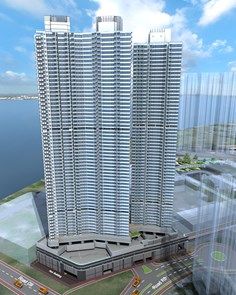