The $1.6bn Mercedes Benz Stadium closes in on opening day

The $1.6bn Mercedes Benz Stadium closes in on opening day

August 2017 will see the opening, and official completion, of the $1.6bn Mercedes Benz Stadium.

Home to the Atlanta Falcons, the 71,000-seater stadium will officially open its doors on August 26, 2017, but one of the major functions of the stadium – a fully automated, retractable roof panel, will not be ready for opening day.

“As we come into new information and new obstacles, we figure out what impact it’s going to have on schedule,” Cannon said in an interview with The Atlanta Journal-Constitution. “It became clear, based on the construction moves of the roof we have had, based on some of the delays we have had, that we didn’t have time to automate the roof.”

Designed with a 12-minute open/close time slot, the roof will consist of eight steel panels and according to Cannon, due to construction complications and delays it won’t be fully operational until October at the very latest.

“We’d rather just have great events under a closed roof,” he added. 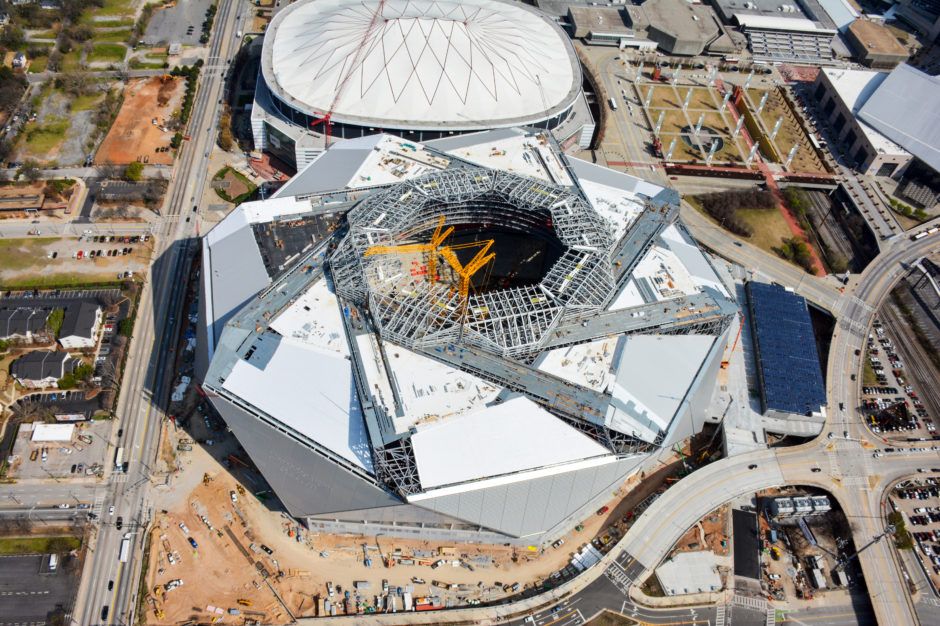 The 72,000-seat stadium has been under construction since May 2014 including the work of a joint venture of four different contractors, each working on individual aspects of the stadium.

These include AECOM HUNT (Construction Manager at Risk), Holder Construction which operates one of the largest cranes in the U.S, HJ Russel and C.D Moody Construction Co.

The mighty stadium boasts an impressive array of features, including the retractable roof which will be made from ETFE Fabric that allows translucent light to enter the stadium.

There will also be a 360-degeee HD Video board, the first of its kind in American soccer. This has been dubbed a “game changer”. It stands at 58 ft. tall and will be the largest HD screen in the NFL but also the world.

The architect behind the stadium is HOK, which promised a “design for flexibility” allowing the to be quickly reconfigured to accommodate games for Atlanta United FC, the city’s new Major League Soccer franchise.

The Mercedes Benz Stadium, as a testament to its significance in the NFL, will host the 2019 Superbowl, one of the largest sporting events in the world.

The Mercedes-Benz Stadium is targeting the highest Leadership in Energy and Environmental Design (LEED) Green Building Rating System™ certification, the industry’s internationally-recognised rating system for environmentally conscience developers and setting the bar for environmental responsibility for venues around the world.

The stadium can proudly boast: