Featured Article
People and Skills
Marketing
investment
Marketing
The global construction market remains an overstretched and over reliant market, based on a major skills shortage becoming an ever-growing problem.

The global construction market remains an overstretched and over reliant market, based on a major skills shortage becoming an ever-growing problem.

In the latest International Construction Market Survey 2017 from Turner & Townsend, it is revealed that only four regions surveyed have what is described as a “surplus” of labour in 2017.

Those four regions are Muscat, Perth, Santiago and Sao Paulo.

The report reveals that of the 43 markets that were surveyed, 23 reported that they are suffering from a skills shortage, an increase on the previous year total of 20.

Of those 23 regions, Amsterdam, Brisbane, Singapore, Melbourne and London all feature, with the report suggesting that these regions have been over reliant on commodity export earnings.

Counter to that point, the four regions that are reported as to having a “surplus” of labour have achieved this as a result of a significant resources driven construction boom that has now ended. 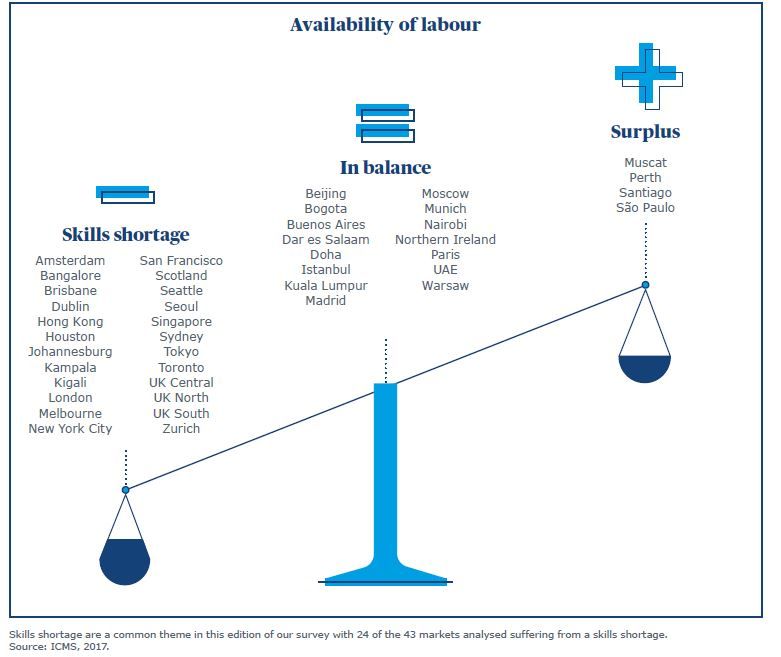 Construction market costs on the increase

The report also reveals that the cost of construction inflation currently stands at 3.7 percent for 2016, but there is a forecasted average rise of 3.5 percent in 2017.

In advanced economies, 20 of the 25 markets saw construction costs rise by more than general inflation – the average price increase for these economies was 2.7 percent, with markets such as Dublin seeing cost inflation as high as 7 percent.

At the opposite end of the scale, Perth was the only market to see negative growth as construction costs fell by 2.0 percent after a period of significant growth during the resources construction boom of 2010–15, when the West Australian economy was one of the fastest-growing economies in the world. Now, the residential construction sector is in a slump, contractors are cutting prices as competition for work intensifies.

Brazil, Russia, and South Africa are towards the top of the list as a result of their relatively high rates of inflation of around 5–6 percent, which leads to pressure to increase wages and higher costs of materials and plant equipment.